A leading Daily Hindi Milap Advertisement Agency with great customer support team which will make ensures that you don't face any problem while booking your ad or tracking in the newspaper. You can contact us via Live Chat, Call us or Email Us.

Being a leading Ad Agency of Hyderabad, we Book Newspaper Advertisement at the same cost or even lesser than the tariff rates of Daily Hindi Milap through our online booking service. 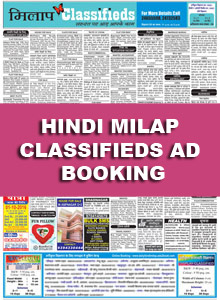 Since over 64 years, Hindi Milap is the largest selling Hindi daily broadsheet of the twin cities of the Hyderabad and Secunderabad. The salient feature of this newspaper is the wide acceptance it commands among the Hindi reading affluent families of the city - predominantly the Marwaris, Gujaratis and the Punjabis and other Hindi speaking communities. It publishes in 2 editions - the first edition covers whole of Telangana, Andhra Pradesh, some parts of Karnataka, and some parts of Maharashtra, while the Second edition is printed for Hyderabad & Secunderabad twin-cities. Daily Hindi Milap has a circulation of about 46,000 copies per day. Go ahead, if you want to reach Hindi readers in this part of India, trust Hindi Milap and use the Internet based booking facility of Ads2Publish.com.

On successful payment, immediately you will receive an auto generated invoice from our system confirming your Classified Ad booking to your registered email id. Then post editorial approval of Advertisement in Daily Hindi Milap Newspaper your ad would be published on the chosen dates.

How are price charged for advertising in Hyderabad Edition of Daily Hindi Milap?

Classified Advertisements in Daily Hindi Milap are accepted in two formats. One is Classified Text Ad and the other one is Classified Display Ad. Both are charged differently because of the difference in their format and placement in Hyderabad Newspaper.

Classified Text Ads in Daily Hindi Milap are formated in simple running text. They are charged based on the number of Line or words used in the advertisement content. To enhance your Classified text ad you can use enhancements options like Background Color, Bold, Tickmark for higher visibility by paying some extra cost.

Classified Display Ads for Daily Hindi Milap can be design according to your own choice of font, images and logos. Classified Display Ad are charged per square centimeter in Daily Hindi Milap Newspaper. But their is restriction for minimum and maximum Height and Width to be taken. You can choose B/w or Colour advertisement as cost of advertisement may vary for B/w and Colour.