Being a leading Ad Agency of Chennai, we Book Newspaper Advertisement at the same cost or even lesser than the tariff rates of Deccan Chronicle through our online booking service. 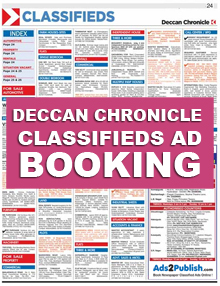 How to book Ad in Newpaper through Deccan Chronicle Advertisement Booking Centre Chennai:

How are price charged for advertising in Chennai Edition of Deccan Chronicle?

Classified Advertisements in Deccan Chronicle are accepted in two formats. One is Classified Text Ad and the other one is Classified Display Ad. Both are charged differently because of the difference in their format and placement in Chennai Newspaper.