Book Classified Advertisements at discounted rates in The Hindu Newspaper through Ads2publish.com, a leading The Hindu Advertisement Agency in Madurai.

View Ad Rates and packages of The Hindu Madurai Classified Advertisement. There are special discounts offered while booking ads through Ads2publish, Authorised Newspaper Ads Booking Agent for The Hindu. Choose the category from below to view ad rates for Madurai newspaper

The Hindu Advertisement Agency in Madurai

Infact, the advertisement offers and packages for The Hindu Madurai Newspaper have been effectively showcased so that you don't miss the opportunity to save money and get the best response from your advertisement in The Hindu.

Being a leading Ad Agency of Madurai, we Book Newspaper Advertisement at the same cost or even lesser than the tariff rates of The Hindu through our online booking service. 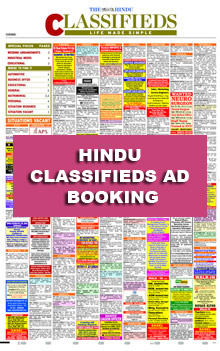 Advertise in The Hindu Madurai Newspaper

The Hindu is a leading Newspaper in Madurai City. It has good circulation and reach as compared to other leading newspapers in Madurai centre. Advertising in The Hindu paper gives you good response and you can reach your targeted readers effectively at low cost. People who has advertise in The Hindu Madurai Classifieds has given Average 4.5 Star rating for the response they recieved.

How to book Ad in Newpaper through The Hindu Advertisement Booking Centre Madurai:

How are price charged for advertising in Madurai Edition of The Hindu?

Classified Advertisements in The Hindu are accepted in two formats. One is Classified Text Ad and the other one is Classified Display Ad. Both are charged differently because of the difference in their format and placement in Madurai Newspaper.