View Ad Rates and packages of Lokmat Kolhapur Classified Advertisement. There are special discounts offered while booking ads through Ads2publish, Authorised Newspaper Ads Booking Agent for Lokmat. Choose the category from below to view ad rates for Kolhapur newspaper

We are Lokmat Advertisement Agents helping you to book ads in Lokmat Kolhapur Newspaper at lowest rates and best service. We have an advertisement booking centre in Kolhapur which facilitates us to book classified advertisement for Lokmat. At our online booking centre we don't charge anything extra from our customers for publishing their ad in Lokmat.

Infact, the advertisement offers and packages for Lokmat Kolhapur Newspaper have been effectively showcased so that you don't miss the opportunity to save money and get the best response from your advertisement in Lokmat.

A leading Lokmat Advertisement Agency with great customer support team which will make ensures that you don't face any problem while booking your ad or tracking in the newspaper. You can contact us via Live Chat, Call us or Email Us.

Being a leading Ad Agency of Kolhapur, we Book Newspaper Advertisement at the same cost or even lesser than the tariff rates of Lokmat through our online booking service. 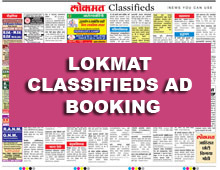 Lokmat is a Marathi Newspaper published from various cities in Maharashtra State. According to Indian Readership Survey it is the tenth largest Indian daily newspaper with 5.887 million readers and it is the largest selling Marathi Daily newspaper with 1.4 million copies a day. It has very strong presence in Nagpur, Aurangabad, Mumbai, Pune, Ahmednagar, Solapur, Kolhapur, Nashik, Jalgaon & Akola. Lokmat is the best advertising option in this edition. Lokmat also has edition printed in English and Hindi which are known as Lokmat Times and Lokmat Samachar.

There are various advertising option in Lokmat Newspaper. Choose the advertising option according to your requirement. Lokmat Classified Column is popular for Matrimonial, Property, Recruitment (Jobs), Name Change, Services, Lost Found advertisements. Book your classified ads in Lokmat Newspaper. Classifieds Column in Lokmat publishes every day in the Newspaper but the response are more for Matrimonial Ads on Sunday, Property, Rental Ads on Saturday and Sunday, Recruitment Ads and Name Change Ads on all days.

Lokmat is a leading Newspaper in Kolhapur City. It has good circulation and reach as compared to other leading newspapers in Kolhapur centre. Advertising in Lokmat paper gives you good response and you can reach your targeted readers effectively at low cost. People who has advertise in Lokmat Kolhapur Classifieds has given Average 4.5 Star rating for the response they recieved.

How to book Ad in Newpaper through Lokmat Advertisement Booking Centre Kolhapur:

On successful payment, immediately you will receive an auto generated invoice from our system confirming your Classified Ad booking to your registered email id. Then post editorial approval of Advertisement in Lokmat Newspaper your ad would be published on the chosen dates.

How are price charged for advertising in Kolhapur Edition of Lokmat?

Classified Advertisements in Lokmat are accepted in two formats. One is Classified Text Ad and the other one is Classified Display Ad. Both are charged differently because of the difference in their format and placement in Kolhapur Newspaper.

Classified Text Ads in Lokmat are formated in simple running text. They are charged based on the number of Line or words used in the advertisement content. To enhance your Classified text ad you can use enhancements options like Background Color, Bold, Tickmark for higher visibility by paying some extra cost.