Select a category to book Ad in Nai Dunia Newspaper: How to book an Ad in Nai Dunia Newspaper?

Follow the given procedure at Ads2publish to book ad in Nai Dunia newspaper for both classified and Display Category.

Looks easy right? So through this simple process view it in Nai Dunia newspaper. After you make payment an confirmation email along with GST Invoice will be sent to you.

What is the cost of Advertisement in Nai Dunia?

The Cost of Advertising in Nai Dunia starts from Rs. 550 and goes as high as Rs. 5 Lakhs.

The cost varies depending on the advertising option and the city you choose for Nai Dunia.

Classifieds are charged per Word, where as the rates for Display Ads are charged in Rupees per square centimeter for Nai Dunia newspaper.

The rates again vary for every page. For example, there is a premium charged for Advertising in Nai Dunia on Front Page, Back Page or Page 3.

Can I get a Discount for Advertisement in Nai Dunia Newspaper?

Yes, There are various discounts and packages offered for Nai Dunia Newspaper.

Further to this Ads2publish offers extra 5% Discount if booked online for Nai Dunia newspaper for Nai Duniya Classifieds. Use Code "PROMO2013" at Nai Dunia Booking Preview Page to get the discount.

Which is the best day to post ad in Nai Dunia Newspaper?

Sunday is the most popular day for Classifieds in Nai Dunia newspaper.

Property on every Saturday and Sunday.

Recruitment Classified are effective on Wednesday.

All other ads are advertised as per the need of advertiser.

Can I post my Ad in Hindi Language in Nai Dunia?

Following are the Nai Dunia booking centers to advertise in Newspaper. 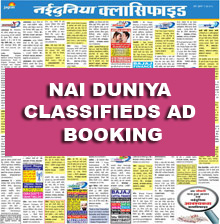 These Ads are published every day in simple running text format under predefined headings provided by newspaper in the classified column. Classified Text Ads in Nai Dunia newspaper are charged based on the number of Line or words used while drafting the advert. This are plain text ads, but Nai Dunia offers some enhancement options to make it highlighted using Background Color, Bold, Tick-mark options. To check Nai Dunia classified text ad rates click on the category from the above list. The page displays the applicable rate for the selected classified category.

This format gives freedom to the advertiser to design their own ad according to their choice using a different font, vibrant images and logo of your company. Classified Display Ad in the Nai Dunia newspaper are a bit higher on the price scale because they are more elaborate and eye-catching than classified text. They are charged per square centimeter in the Nai Dunia Newspaper. There is a restriction for minimum and maximum Height and Width to be taken. You can choose B/w or Colour as cost may vary. Check Nai Dunia Classified Display Rates by choosing any of the listed category above.

Advertisers get quick response by advertising in these classified categories in the Nai Dunia newspaper because of its large readership and wide circulation.

Why choose Ads2Publish to Advertise in Nai Dunia?

We have simplified the traditional practice of booking advertisements for Nai Dunia newspaper through our online ad booking system. We are an Advertising Agency which has been authorized by the Nai Dunia to sell its advertising inventory.

With more than two decades of expertise in the business, we have become the leading Advertising Agency of Nai Dunia. We provide the most competitive prices in the market for buying media space in the Nai Dunia newspaper.

Our recommendations assist our customers in achieving excellent outcomes through advertising in Nai Dunia, while having a hassle-free experience. With this we have grown thousands of happy customers who are pleased to advertise in Nai Dunia newspaper with us.

Ads2publish, the best online option to get advertisement published in several local, regional and national newspapers of India.

On one single platform you can book newspaper ads online for the Times of India, Deccan Chronicle, The Hindu, Hindustan Times, Dainik Bhaskar, Dainik Jagran, Eenadu, Lokmat, Malayala Manorama, Sakal, The Tribune, Gujarat Samachar and many other different language newspapers at discounted price.